Ethics: Robots and the Vulnerable

This is an article that merits consideration by everyone: 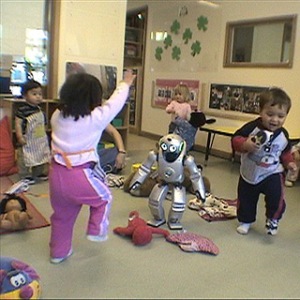 WASHINGTON – A BRITISH scientist is calling for immediate introduction of robot ethics guidelines amid surging use of the machines and concern about their lack of human responsibility while caring for children or the elderly.

In an article published on Thursday in the US journal Science, Noel Sharkey, a professor of artificial intelligence and robotics at the University of Sheffield, argues that the steady increase in the use of robots in day-to-day life poses unanticipated risks and ethical problems.

Outside of military applications, Professor Sharkey worries how robots – and particularly the people who control them – will be held accountable when the machines work with ‘the vulnerable’, namely children and the elderly, stressing that there are already robotic machines in wide use such as the Japanese meal assistance robot ‘My Spoon’.

Robots could also soon be entrusted by parents to guard and monitor their children, replacing a flesh-and-blood nanny but posing potential problems in long-term exposure to the machines.

‘There are already at least 14 companies in Japan and South Korea that have developed child care robots,’ according to Prof Sharkey.

‘The question here is, will this lead to neglect and social exclusion?’ He said short-term exposure ‘can provide an enjoyable and entertaining experience that creates interest and curiosity’. But ‘we do not know what the psychological impact will be for children to be left for long hours in the care of robots’, he told AFP.

Experiments conducted on monkeys suggest there is reason for concern, Prof Sharkey said. Young monkeys left in the care of robots ‘became unable to deal with other monkeys and to breed’, he said.

With prices plunging by 80 per cent since 1990, consumer sales of robots have surged in the 21st century, reaching nearly 5.5 million in 2008, and are expected to double to 11.5 million in the next two years.

‘They are set to enter our lives in unprecedented numbers,’ said Prof Sharkey, expressing fear that an absence of ethical rules fixed by international bodies could mean the machines’ control will be left to militaries, the robot industry and busy parents.

The scientist also points to the remarks of Microsoft founder Bill Gates, who he said predicted that ‘over the next few years robots may be a pervasive as the PC’, or personal computer.

‘We were caught off guard by the sudden increase in Internet use and it would not be a good idea to let that happen with robots,’ Prof Sharkey said.

‘It is best if we set up some ethical guidelines now before the mass deployment of robots rather than wait until they are in common use.’ He said it was vital that action be taken on an international level as soon as possible, ‘rather than let the guidelines set themselves’.

For Prof Sharkey, who has studied robotics for 30 years, such standards are compatible with the rise of robots, of which he is an enthusiastic defender. He stressed the benefits that robots can bring ‘to dangerous work and medicine’.

Prof Sharkey shrugs off doomsday scenarios in books such as Isaac Asimov’s I, Robot about the threatening interaction between robots and humans, or in movies such as the The Terminator in which robots take over the world.

Such story lines will remain firmly in the realm of fantasy, even as societies hurtle towards greater automation, he said.

‘I have no concern whatsoever about robots taking control. They are dumb machines with computers and sensors and do not think for themselves despite what science fiction tells us,’ he said.

‘It is the application of robots by people that concerns me and not the robots themselves.’ — AFP