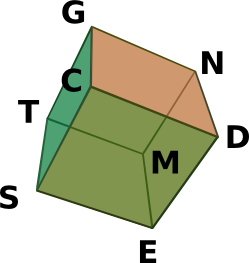 Look at the vertexes of the hexahedron as entities.

Look at the edges and axes of the hexahedron as associations.

The instances for the entities and associations are the sets we are working with.

The key is the universe is composed of particles of a broad variety.  But every particle is simply an association in the form of a set.  The lowest order particles are event and point.  They are one dimensional particles.  All subsequent higher dimension particles can be reduced to a subset of these particles.

I have revised my theory to include the observer in the system.  I am of the opinion that the observer is not unary but binary having two hemispheres to the brain.  Position and Velocity are composed of sets not points and are observed separately by the ordinal and cardinal hemispheres of the observer.  Consequently, the universe is not probalistic, but wholly deterministic.

Sequa is an ordinal point set while frequa is a cardinal event set.

Quala is an ordinal sequency set while Quanta is a cardinal frequency set..

Grava is an ordinal quality set while Erga is a cardinal quantity set.

Who – Whom : Ordinality – Cardinality

Orda is an ordinal gravity set while Erga is a cardinal energy set.

I think there are even higher order entities and associations, but I have still to work them out.

Framework for a Real Enterprise

It was Peter Drucker who revealed undeniably that business was a science that could lead to predictable results.  The way he did so was by collecting and systematizing all the knowledge he could gather on the subject and then testing hypotheses.  After much deliberation on the science of systems and the science of business.  I present the Physics Framework above and the Enterprise Framework below.  As one physics Nobel laureate said, “If you aren’t doing physics, you’re stamp collecting!” 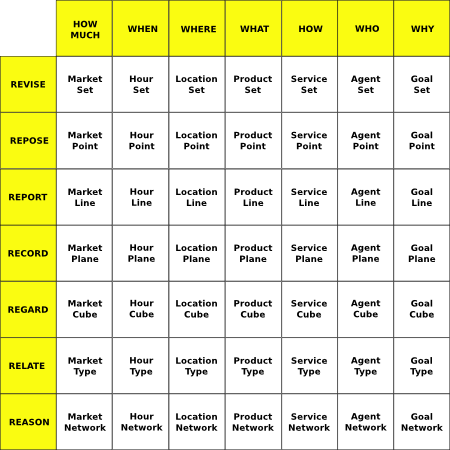 I am working to refine my framework table for a lay audience. It is a vocabulary for a business system. Like the Linnean system, by using the intersection of the row and column (two terms) I can identify any operation of the system. Still needs work, but its getting there.

It is based on an associative (node and link) architecture not a relational (table and relationships) architecture.

At first glance this might be regarded as a Zachman Framework.  The columns by convention are called focuses.  The rows called perspectives.  The interrogatives make up the column header.  John Zachman offered some poorly chosen row headers which I’ve replaced.  There are two major differences.  First, it requires an additional focus as part of the enterprise, the Market which is measured in potential profit.  It’s time for the academics and bureaucrats to stop turning up their noses to the source of their existence:  a market that will pay in currency to fatten their budgets.  Second, REVISE, the nodes, are something obvious to Einstein; RELATE, the links, something obvious to Drucker (remember the links are verbs); REPORT, the node and link attributes, should be obvious to Thomas Jefferson; RECORD, the databases, to Carnegie; REGARD, the datatypes, to Turing; REPOSE, the ordinality, which remembers whats related to what, REVEAL, the cardinality, full of exceptions to the enterprise.

Tearing apart the Zachman Framework has yielded great results.  I have identified the core nodes and links (we won’t use the terms entities and associations any more).  The new Nodes of the Czerepak Framework are:

The new Links are:

If you look at the link icons you can see what I am hypothesizing as the optimum cardinality for each.  I am thinking about this from the perspective of the Platonic solids, R. Buckminster Fuller’s work, Stuart Koffman’s work with chaos theory and Boolean networks and Albert Einstein’s own love for geometry.

The set of icons created to this point are below: